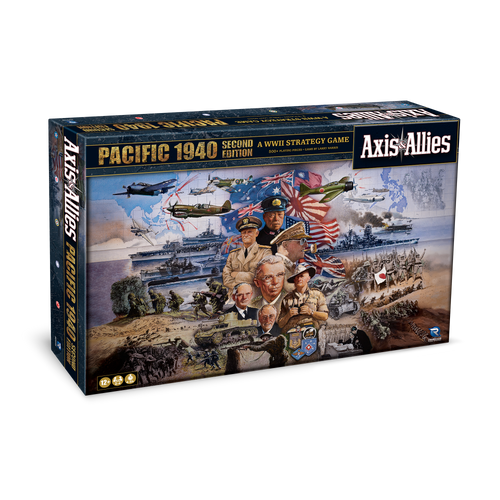 The year is 1940. Japan continues to flex its military might in China as political tension grips the world. In Europe, France is about to fall, and Asia braces for the impact. Holland, now occupied by Germany, is forced to leave its resource rich colonies in the Dutch East Indies vulnerable to the oil-starved Imperial Japanese Empire. French Indo-China will soon be occupied by Japanese land, sea, and air forces. Britain has received an ultimatum to close the Burma Road or risk war with Japan. The United States reacts with an embargo of strategic materials. The stage is set.

You’re among a flotilla of ships that survived passing through a black hole. The fabric of space and the general physics you’ve known have changed. You quickly discover that your engines are offline,...

Channel your inner lazy egg in this holiday edition of the hit card game! Take as many cards as you want, but don’t get scrambled on the last card! The Gudetama card game is a trick-taking game for...

“Looks like you could use a little help.” — Cam Watanabe New heroes join the Power Rangers in the fight against evil just when they are needed most! This expansion introduces a diverse cast of new...

Pre-order now for a Q3 release! Join the Battle! Circadians: Chaos Order is a competitive, confrontational area control game with highly asymmetric Factions. Each Faction has unique Leaders and...

Pre-order now for a Q3 release! We were light years from our home, galaxies away, when we first discovered this ancient celestial body. A planet filled with intriguing intelligent lifeforms, not too...

Pre-order now for a 2023 release! Decide the Fate of a Nation and the Destiny of the World As an Axis power, you will plan, build, and maneuver your mighty fleets of ships and aircraft in your effort...

Pre-order now for a 2023 release! Spring 1942, The world is at war! Five major powers struggle for supremacy: Germany and Japan are aligned against the great alliance of the United Kingdom, the...

Pre-order now for a 2023 release! The world is at war! Five major powers struggle for supremacy. Germany and Japan are aligned against the great alliance of the United Kingdom, the Soviet Union, and...

The Search for Lost Species PRE-ORDER

Pre-order now for a Q4 release! Thousands of plants and animals have been discovered but haven’t been seen for decades and could be extinct. In order to save these species, we must first find...