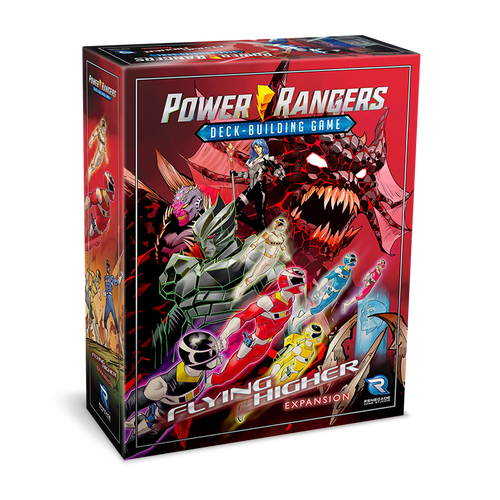 Zordon has been captured! Led by Astronema, the Princess of Evil, the forces of Dark Spector are spreading out to conquer the galaxy. Only Andros and his Space Rangers can save the universe from being plunged into darkness. Hop on your Galaxy Glider and rocket into action!

This expansion requires the Power Rangers Deck-Building Game Core Set or Zeo – Stronger Than Before to play.

The Power Is On! Unite as the Power Rangers to assemble the Megazord and defend Angel Grove!  Or… Conspire as the Villains to dominate the city with your powerful minions!

Fueled by the power of the Zeo crystal, the Zeo Rangers are the strongest fighting force ever assembled.  The Machine Empire, led by King Mondo, is determined to destroy the Earth.  Can the...

Omega Now, Omega Forever! When the Morphin Grid was shattered, its energy empowered individuals across the galaxy. In this expansion to the Power Rangers Deck-Building Game, you can play as one of...

This free material provided by Renegade will help suppliment your game and take it to the next level! Purchase this €0 item by adding it to your cart and checking out as usual (no payment will...

Destro and Scrap Iron have arrived to help Cobra bring the world to its knees! Thankfully, Roadblock, Bombstrike, and Gung Ho have arrived to reinforce the G.I. JOE team against this explosive threat...

One-stop-shopping for all released Power Rangers: Heroes of the Grid Bonus Scenarios. Future scenarios will be added to this item upon release.

Pre-order now! For a limited time, pre-orders will come with a PDF copy of the Power Rangers Roleplaying Game Adventures in Angel Grove at no additional cost. Any order cancellation involving a free...

Pre-order now for a Q4 release! Reality Distorted The Dragon & The Rogue is an expansion for Vampire: The Masquerade - Rivals that adds two new clans:  TZIMISCE & RAVNOS.  Where...

Secrets in the Dark Shadows & Shrouds is an expansion for Vampire: The Masquerade - Rivals that adds two new clans:  LASOMBRA & HECATA.  The Lasombra love to win and...

November Release! “Evil spells, Santa smells, cursing coal all day. Oh what fun it is to turn kids bad on Christmas Day, hey!” —Heximas The holidays are a time of mirth and...