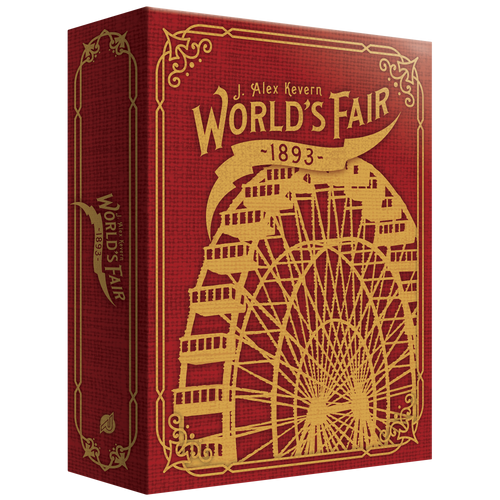 The World's Fair of 1893 in Chicago was a spectacular international exhibition that showcased many great achievements in science, technology, culture, and entertainment. In the Mensa Select Award-winning World's Fair 1893, you can travel back in time and assume the role of the event organizers. You will compete against other players to gain influence and obtain the grandest exhibits to be displayed at the fair.

The World's Fair was an event that demonstrated what was at the time considered cultural and technological entertainment; however, racism and segregation were an overarching reality and African Americans and Indigenous Americans were excluded. The New edition of World's Fair 1893 now includes a new group of diverse playable historical figures.

When our team was working on this new edition, we worked with historical consultant Jade R. Rogers the founder of The House of Afros, Capes & Curls. You can check out her website at www.jaderrogers.com. The new rulebook includes a historical note she wrote about race at the World's Fair in 1893.

In 1893, it had been less than 30 years since the abolition of slavery in the United States. Despite the progress of the African Americans, they were not given the opportunity to share their own accomplishments at the World's Fair. These five new playable historical figures were instrumental in giving African Americans and other disenfranchised groups the chance to highlight their progress and achievements.

"World's Fair 1893 is an elegantly designed game of area control and set collection that is certain to delight the masses. This has quickly risen to be a favorite for me to introduce people to our hobby because of its simplistic rules and complex mastery. Brilliant. Elegant. Fluid. World's Fair 1893 is a game that everyone should have in their collection." — Brandon Nall, Brawling Brothers podcast

"This is a wonderful, fast-playing, practically a filler just slightly bigger than a filler. It's a really quick game, which you can tell because I actually made it through an entire runthrough, which normally I don't do. It's just so fast and so fluid, and fun from start to finish." Richard Hamm, Rahdo Runs Through

Released June 2022! App Status: The app is nearing completion. There are a few final adjustments our developer is making so we can ensure the best possible experience for those who play the game. We...

Vampires awake from their torpor as the eternal roses are blooming. You have until sunrise to run to the labyrinth and pick the most beautiful bloom, hunting for humans on your way, tempting...

Pre-order now for late 2022 delivery. The Artisans of Splendent Vale is a cooperative adventure game set in a magical and unique land. As a troupe of artisans, you will explore the beauty of the...

Skelit’s Revenge.  The most feared ship on the high seas… you’ve finally overtaken it.  Captain Fromm and his skeleton crew have amassed a massive treasure, and now is...

The Search for Lost Species PRE-ORDER

Pre-order now for a Q4 release! Thousands of plants and animals have been discovered but haven’t been seen for decades and could be extinct. In order to save these species, we must first find...

In this fast, competitive game players are rival wildlife photographers on a hunt to snap photos of the elusive and illustrious birds-of-paradise. Players lure birds to their tree from the jungle,...

You’re among a flotilla of ships that survived passing through a black hole. The fabric of space and the general physics you’ve known have changed. You quickly discover that your engines...

Crusaders: Thy Will Be Done Deluxe Version PRE-ORDER

Alice is Missing is a silent role playing game about the disappearance of Alice Briarwood, a high school junior in the sleepy Norther California town of Silent Falls. During the game, players use...