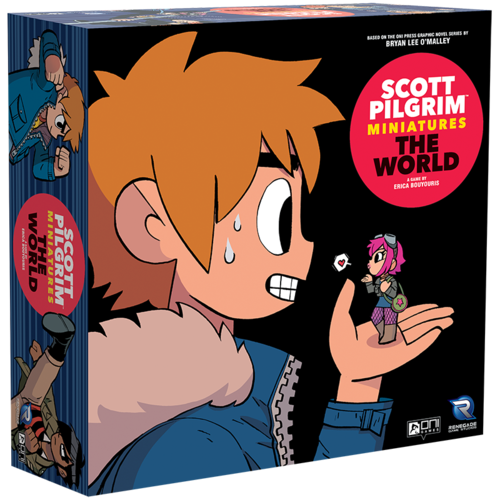 Our is expected to arrive in August!

Scott Pilgrim Miniatures the World base game is required to use these expansions.

Learn more about Scott Pilgrim Miniatures the World here!
Scott Pilgrim Miniatures the World is a competitive board game where one team takes on the role of Scott and the other Good Guys to fight against the League of Evil Exes. Each character has unique powers, and as they battle, they will level up and unlock new special abilities. The action takes place on a pop-up board with large detailed miniatures, custom dice, and 3D constructible objects for smashing and throwing! This expansion box includes the additional battles against Evil Exs #2-7!
Includes components for the following:

We expect this item back in our warehouse in May 2022. Trouble is Brewing. Blood & Alchemy is an expansion for Vampire: The Masquerade Rivals Expandable Card Game

Skelit’s Revenge.  The most feared ship on the high seas… you’ve finally overtaken it.  Captain Fromm and his skeleton crew have amassed a massive treasure, and now is...

November Release! “Evil spells, Santa smells, cursing coal all day. Oh what fun it is to turn kids bad on Christmas Day, hey!” —Heximas The holidays are a time of mirth and...

Pre-order now for late 2022 delivery. The Artisans of Splendent Vale is a cooperative adventure game set in a magical and unique land. As a troupe of artisans, you will explore the beauty of the...

Alice is Missing is a silent role playing game about the disappearance of Alice Briarwood, a high school junior in the sleepy Norther California town of Silent Falls. During the game, players use...

For a limited time, pre-orders will come with a PDF copy of the Power Rangers Roleplaying Game at no additional cost. Any order cancellation involving a free PDF will only refund the price of the...

Released June 2022! App Status: The app is nearing completion. There are a few final adjustments our developer is making so we can ensure the best possible experience for those who play the game. We...